Be in the know of Diamonds with Sunny Diamonds.

A serene bride, draped in glistening golden jewellery and gorgeous gemstones is part of the Kerala wedding tradition. Every bride resembles a divine entity on her special day — and the gorgeous wedding jewellery that draws its inspiration from nature, community, and religion allows her to bridge the modern world with Kerala’s ancient traditions.

Each resplendent piece of jewellery that a Kerala bride wears has its own special cultural meaning. Many brides choose to mix family heirlooms with new pieces of their own, blending the past with the present in an intricate, personal way.

Whether your personal style is modern or traditional, here are the jewellery pieces you should consider adding to your bridal wardrobe:

This stunning necklace is usually one of the first pieces of wedding jewellery that the Kerala bride dons. Traditionally, the centre pendant is studded with coloured gemstones or diamonds and hung on a thick gold chain. The centre design is an engraving of the Goddess Lakshmi, symbolising the wealth and prosperity that is wished on the bride and her family. 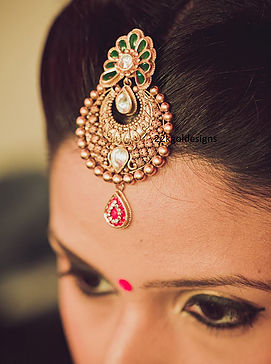 A type of maang tikka, no Hindu bride’s wedding set is complete without this piece of jewellery. Some are simple affairs with two gold chains framing the forehead, while others are more elaborate, with gems like diamonds, rubies, and emeralds. Some brides also choose to add additional hair adornments like the Jadanagam, or “hair serpent” that is worn down the bride’s plaited braid. 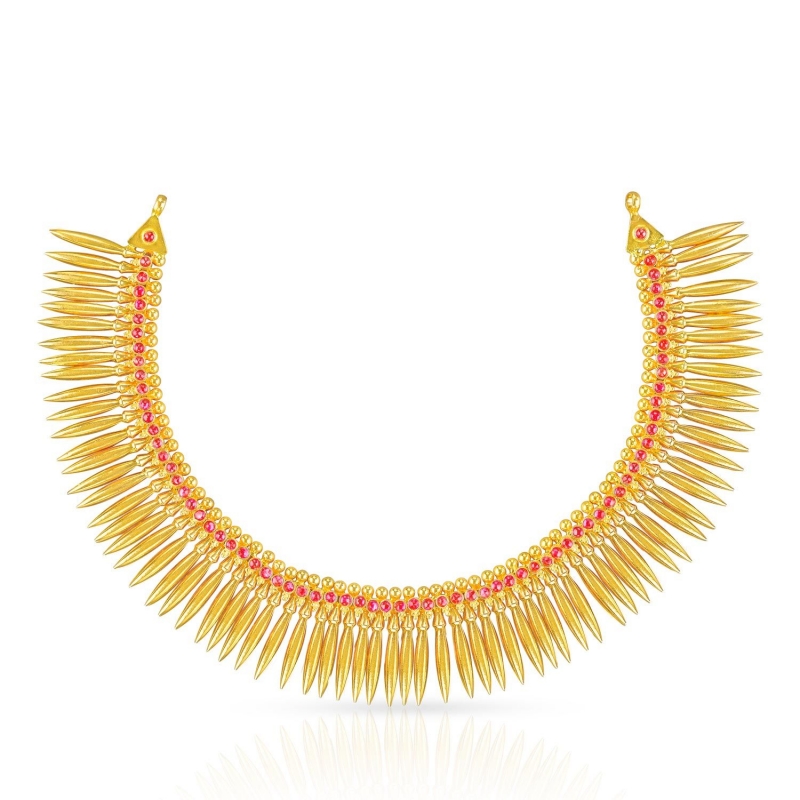 These lovely necklaces both draw their inspiration from jasmine buds. The Mullamottu’s motif is more rounded, while the Pichimottu mala uses an elongated form of the bud. It is often longer than many of the other necklaces and forms an elegant line that adds to the bride’s regal appearance. Jasmine flowers are an ancient symbol of beauty, love, purity, and prosperity among Hindus. 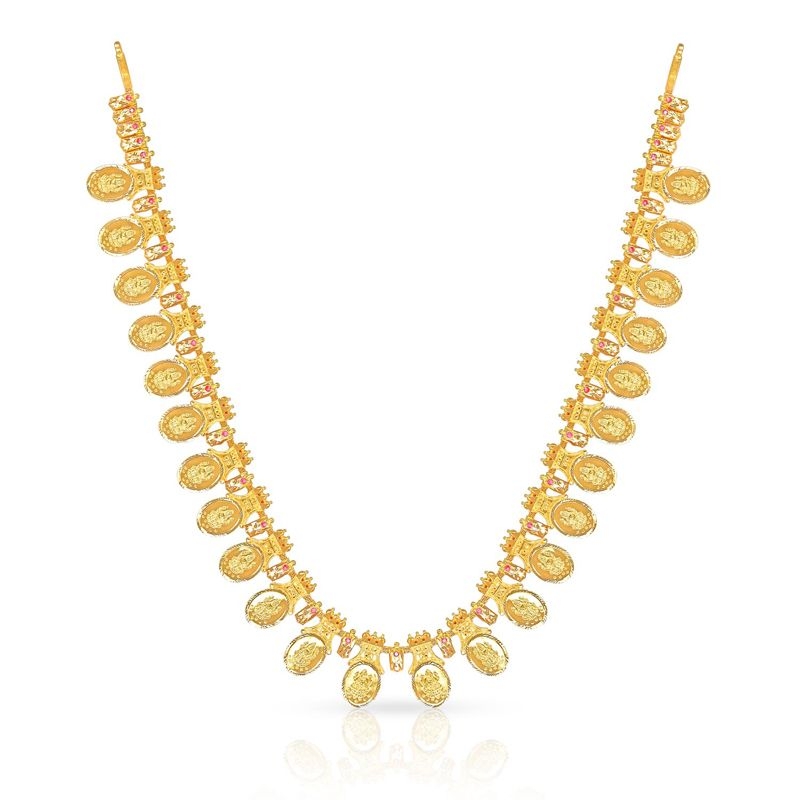 The Goddess Lakshmi is always an important part of Hindu weddings, and this particular necklace is a reminder of the harbinger of both material and spiritual prosperity. This necklace is a staple at Kerala weddings and typically features small gold coins that are closely strung together. Each coin is engraved with a tiny figure of the Goddess Lakshmi to invoke her blessing on the union and bride. 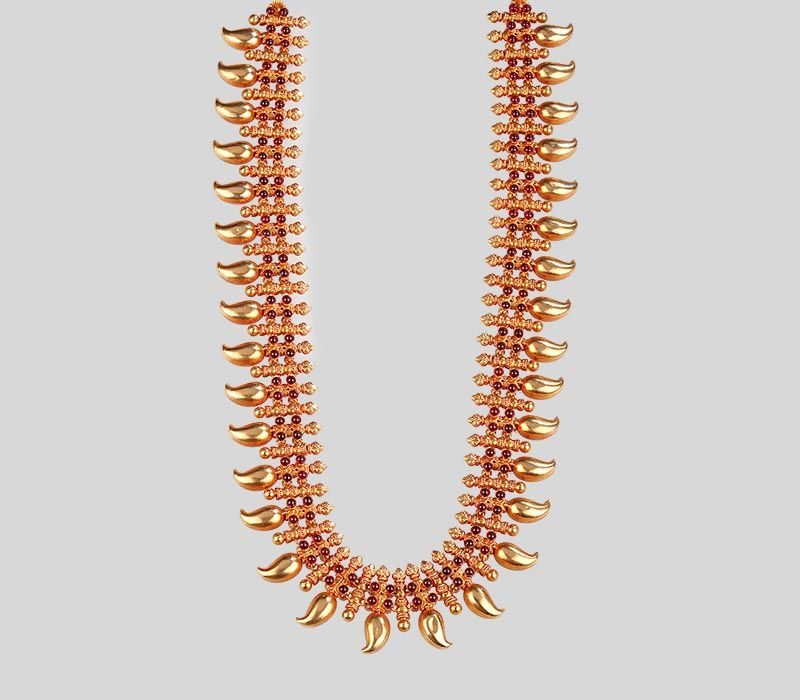 This particular necklace has a paisley-shaped motif. While traditionally enameled in green lacquer, it is widely available in different colours and metals today. The little paisleys are literally meant to represent tiny mangos — which are symbolic in the Hindu tradition of love and fertility. Mango leaves are a common site around all Indian weddings. 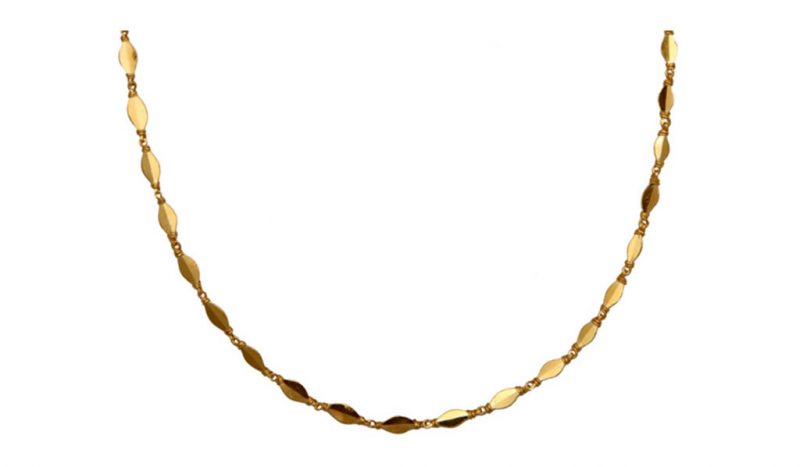 This gorgeous necklace is shorter — but no less dramatic than the others. It draws the inspiration for its long beads from the puffed and flattened rice that is one of the staples of Indian cuisine, particularly among the Kerala. Because of this, rice is considered a symbol of abundance and good health and is present in most important rituals. 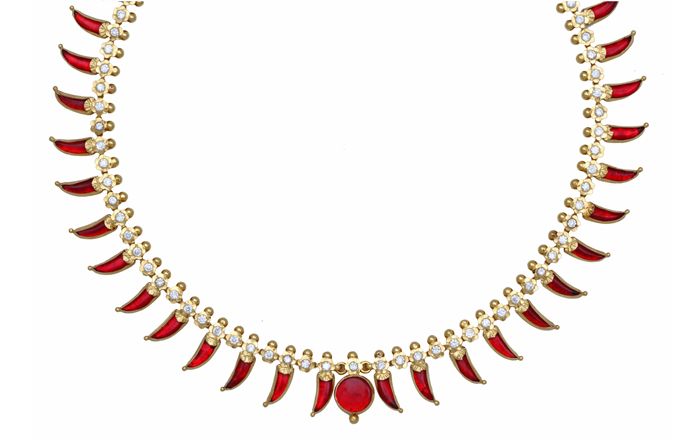 Known as the “tiger claw” mala, the shape of the beads resembles actual claws and can come in many colours. It may be either a shorter, choker-style piece or a longer chain. Either way, it’s a stunning visual piece that is bound to leave an impression as regal as the tiger itself. 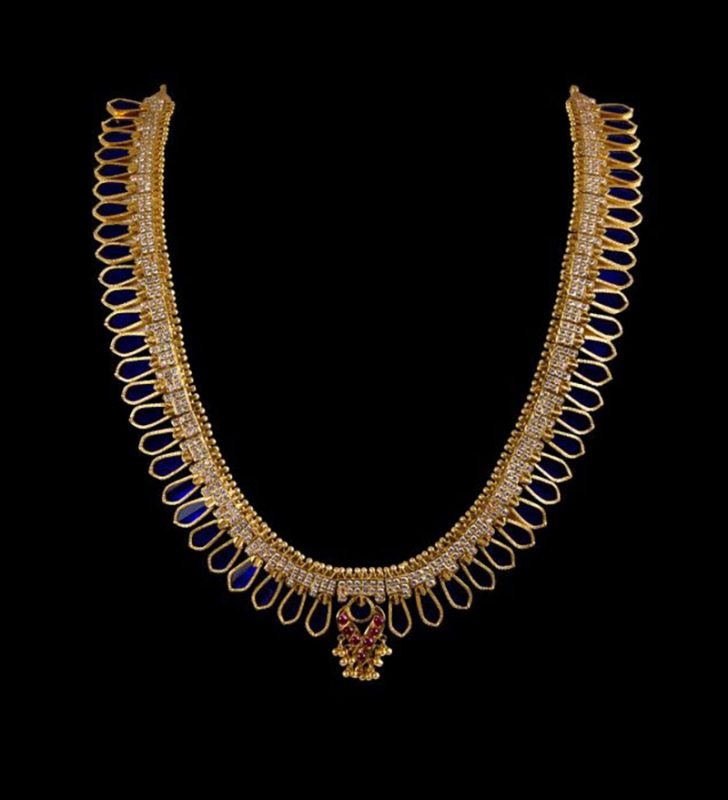 This heavy necklace has a centrepiece that resembles the hood of a King Cobra. Gemstones or coloured glass set in a gold frame are favourites for this particular piece and it’s a traditional part of Kerala bridalwear. In Hindu culture, the snake represents both eternity and the three greatest forces in the universe: creation, preservation, and destruction. It is a symbol to be revered, not feared. 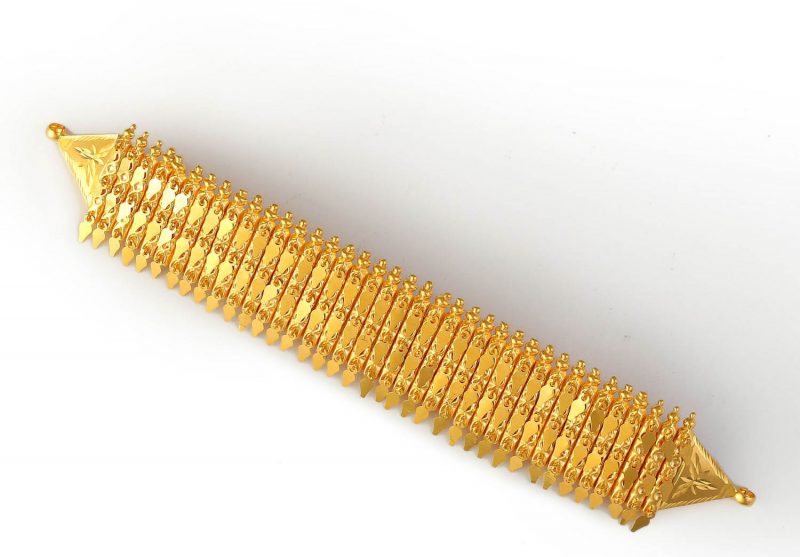 This is a highly-polished choker that is made of intricate strands of gold and it shimmers with every movement the bride makes. It sits above all the other necklaces that she may wear and is a particular favourite among Christian brides and those who want to add a modern touch to their wedding set. 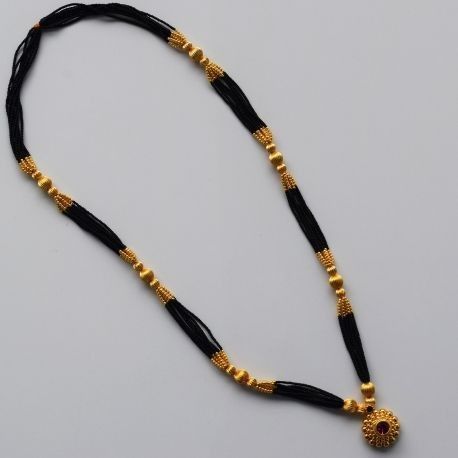 Generally one of the largest necklaces the Kerala bride will wear, it is usually formed of an intricate pattern of black and gold beads with a gold mandala in the centre. Also called the “Mangalsutra,” the black and gold beads threaded together to symbolise the joining of husband and wife, two souls on a journey together.

This is a waist belt that is designed to emphasise the slender figure of the bride. When it is broad, it is often inscribed with intricate designs of various deities for Hindu brides or nature motifs for Muslim brides. It may be heavily accented with diamonds, rubies, or emeralds — although some modern brides prefer the more delicate look of several thinner chains linked together. 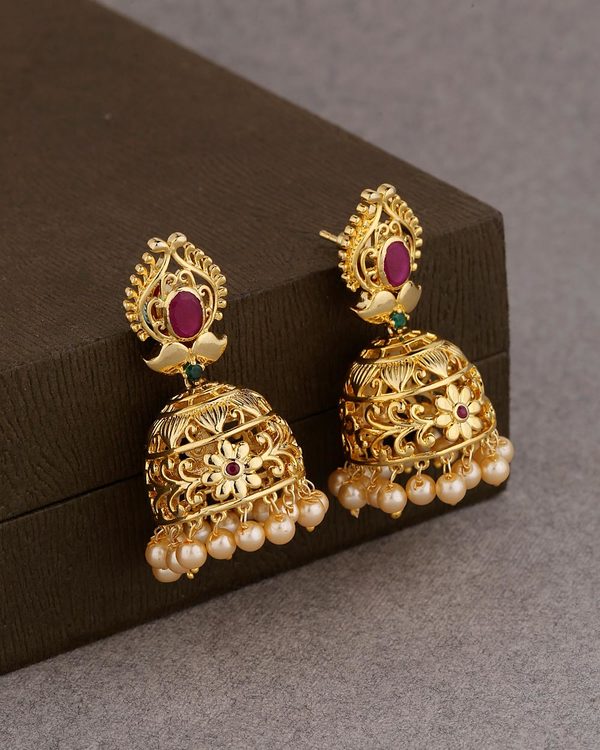 These large, drop-style earrings that resemble bells come in a broad variety of styles and are associated with spiritual development and social status. Some modern brides prefer a more understated style, however, and have adopted a broad, stud type of earring known as “Thoda.” These are often accented with diamonds, pearls, rubies, or emeralds and add a sensual touch to the bride’s attire. 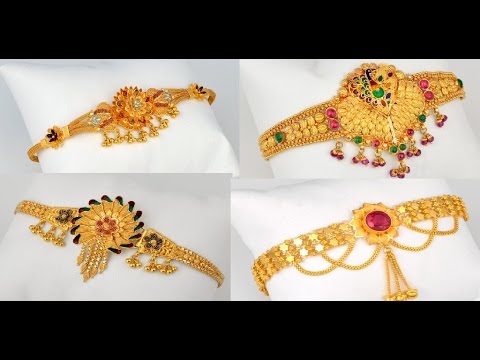 Also called a “bajuband,” this particular type of armband is common among South Indian brides like the Kerala, though less common in other areas. Meant to be worn on the upper part of the arm, it is often made of gold and accented with precious gems, like diamonds. The baaju band is a symbol of power and strength — which makes it a wonderful thing for any modern bride to incorporate into her wedding set. 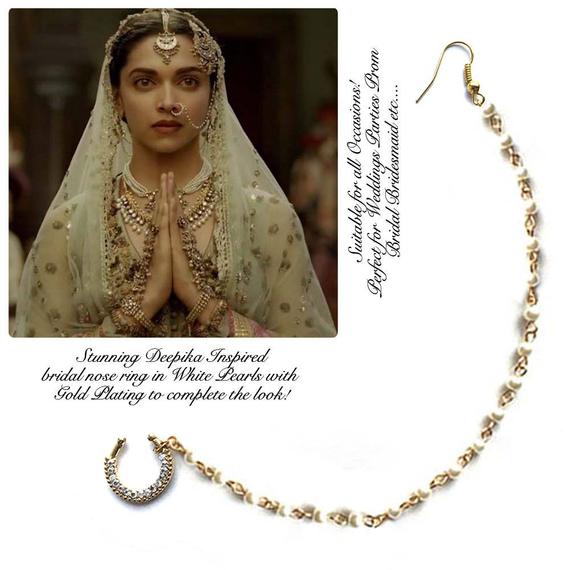 Nose rings, also called “mookuthi,” have become an important part of Indian culture and weddings — but they’re not sheerly for adornment. They come in a wide variety of metals, stones, and styles, although both gold ones and simple diamond studs are equally popular. Traditional wisdom says that the Nath is reserved for married women, so it’s a sign of her social status. The piercing is also believed to influence the female reproductive organs and reduce the pain of childbirth. 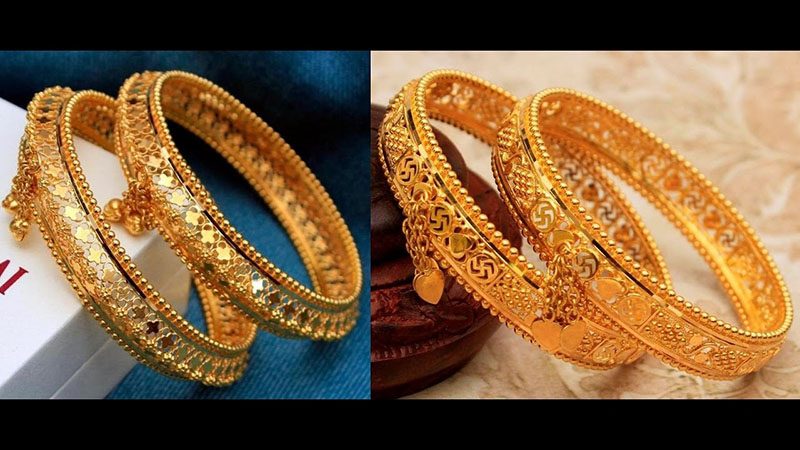 Kerala brides are often adorned from wrist to elbow with countless bracelets of varying designs and materials. The thicker bangles are called “thadavala,” while thin ones are referred to as “ottavala.” Diamonds, gemstones, pearls, and enamels are all popular choices. Bangles are a particular symbol associated only with married women, so many brides prefer to incorporate a new piece or two in with their wedding attire so that they can continue to wear the bangles during everyday life. 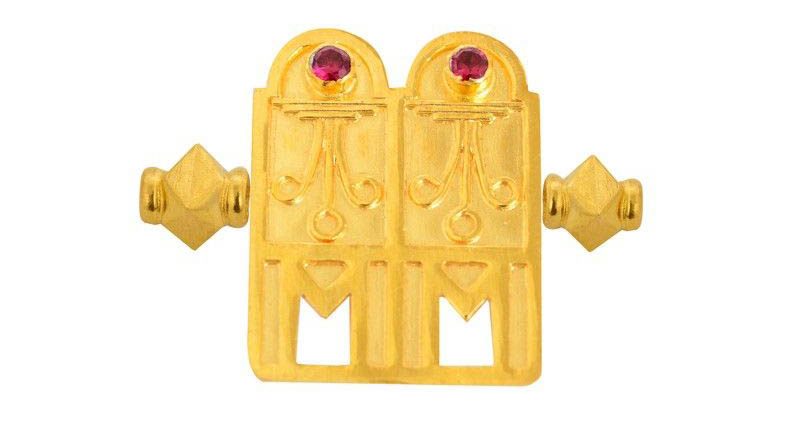 This is the most symbolic and important piece of bridal jewellery at any wedding — although the bride doesn’t start the ceremony with it on. This leaf-shaped piece is fastened around the bride’s neck by her groom during the actual ceremony at the most auspicious hour. It is symbolic of the husband’s respect for his wife, the dignity of her place, and the love that is shared between them.

While Kerala people have always held a special passion for yellow gold, other metals have also become popular. It’s not uncommon to see silver jewellery in a bride’s outfit or for white gold to make an appearance — particularly once the bride changes into her post-nuptial sari for the afterparty. Diamonds, both cut and uncut, are becoming increasingly popular among modern brides.

There are many sets of Kerala wedding jewellery out there to suit many different tastes. You can also incorporate just a new piece or two of jewellery into your bridal wardrobe to add your personal touch if you’re wearing vintage pieces that have been in your family for a while.